The Scriptures reveal that there are times when God will move a people to prophesy in ignorance about that which He intends to do. We see such an instance when the High Priest of Israel spoke concerning his intention to have Christ Yahshua crucified. The words he spoke were filled with prophetic meaning, though he did not discern what it was he had spoken.

John 11:49-52
But a certain one of them, Caiaphas, who was high priest that year, said to them, "You know nothing at all, nor do you take into account that it is expedient for you that one man should die for the people, and that the whole nation should not perish. " Now this he did not say on his own initiative; but being high priest that year, he prophesied that Yahshua was going to die for the nation...

There was another occasion when the entire population of Jews gathered in Israel prophesied along similar lines, not knowing what it was they were saying.

Matthew 27:24-26
And when Pilate saw that he was accomplishing nothing, but rather that a riot was starting, he took water and washed his hands in front of the multitude, saying, "I am innocent of this Man's blood; see to that yourselves." And all the people answered and said, "His blood be on us and on our children!"

Thus we see the ruler of the nation, and the masses of the people, both prophesying in ignorance. They did not know what it was they were saying, but God knew full well.

As I have looked further into the events surrounding the inauguration of Barack Obama as President of the United States, I have been amazed to find that there have been similar prophetic utterances spoken in ignorance by both the masses of the people, and the President. As I looked further into the matter of the song American Pie being sung at the inaugural concert, I have come across video clips from the event posted on YouTube.

The inaugural concert was held in front of the Lincoln Memorial. This setting is itself part of the prophecy. It was during Lincoln’s presidency that the nation was divided and large numbers of American citizens perished. Cities were destroyed, martial law was instituted, and days of great tragedy befell the nation. The video clip below has not been edited by me. I was drawn to it by the fact that it was exactly 22 seconds in length.

On that day it is reported that half a million people were gathered for the concert, and they sang along with the song American Pie which themselves was surely chosen of the Lord for this occasion. Watch and listen to that which the American people are saying.

Not only were the masses of the people singing, but so too was Barack Obama. Much has been spoken by Obama’s supporters and the media about the parallels between the current president and Abraham Lincoln. Like the High Priest and the people in Jerusalem, the intent of these words has been very different in the minds of the people and the mind of God. There were some very dark and evil things in the life of Abraham Lincoln, not the least of which was the way in which he died. He was killed by an assassin’s bullet.

The following video also drew my attention. It is exactly 11 seconds long, and the significance of the number 11 is described by E.W. Bullinger in the following way.

Bullinger specifically cites as an example of the significance of this number, the fact that Christ appointed 12 disciples who were to become 12 apostles. These represented the number of divine government, yet when Judas committed suicide the number of disciples fell to eleven. Upon the death of Judas, disorder, disorganization, imperfection and disintegration became the condition of the governmental order established by God.

There have been signs which many have interpreted to be declaring that Barack Obama’s time in office will also end in tragedy. His life will follow the pattern of Abraham Lincoln in ways he does not anticipate, or desire. Listen now to his words as he is seated in front of the Lincoln Memorial.

In previous blogs I have mentioned some of the signs pointing to a similar end for the current President. It was mentioned on the Unleavened Bread Ministries website that on November 5th, the day that the election results were made known and Barack Obama made his acceptance speech that his wife and family were all dressed in a very symbolic manner. (Note that UBM ministries has withdrawn the article from which the following pictures were copied. I have found no explanation for their having done so.) 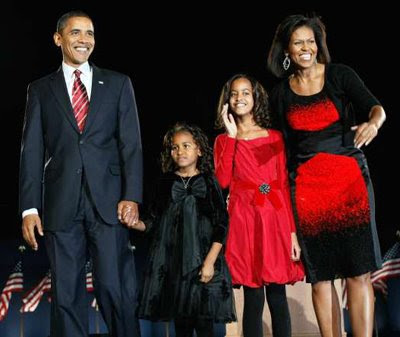 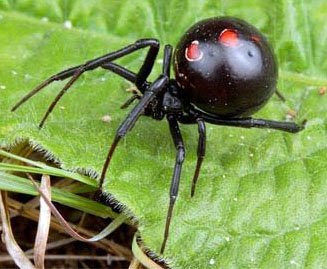 Even the mainstream news has been reporting concerns for the safety of the current president’s life. Recently, for several days one of the top stories on the CNN website featured a descendant of a black slave who said she was afraid that someone would assassinate this man, leading her to not vote for him out of concerns for his safety.

Back during the presidential campaign when Barack Obama and Hillary Clinton were running neck and neck, and the outcome was uncertain, I reported on an event of great symbolism.

In early May, 2008 the news was all focused upon the race between Hillary Clinton and Barack Obama. During the height of the race an amazing occurrence took place. On May 3rd the Kentucky Derby was held, and there was no better place for two politicians to be seen than at the race. Before the race Hillary and Barack both were seen near the horses they had chosen to root for during the race. Hillary quite naturally picked the only filly running, which was a horse named Eight Belles. Barack Obama, perhaps because he is a man of color, picked Big Brown.

Interestingly enough Big Brown won the race and the filly Eight Belles came in second, and this is the order in which the Democratic race also ended. A tragedy occurred when Eight Belles passed the finish line and began the cool down lap. She unexpectedly collapsed. It was found that she had shattered both of her front ankles and she had to be euthanized on the track. Interestingly, Eight Belles was the 40th filly to run in the Kentucky Derby, and 40 denotes judgment as is seen in the flood of Noah’s day when it rained 40 days and nights. 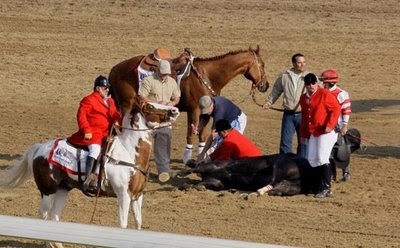 This seems to be a fitting parallel to Hillary Clinton’s run for the presidency. Hillary was expected by many to win the presidential nomination. After she lost, coming in second, many thought because of her strong support that she would at least be offered the vice president’s position, but it was offered to Joe Biden instead. Hillary was taken out of the presidential race completely.

Obama was rooting for Big Brown, and this horse won the Kentucky Derby even as Obama later won the Democratic nomination. Big Brown went on to race in the Preakness on May 17th, and coming in first by a good margin. Barack Obama’s next race after winning his party’s nomination was the general election, and true to form he came in first by a wide margin.

When things occur which are unprecedented, or highly unusual, we should take note. There is much being symbolized in these things. The day that this event will find its fulfillment will certainly be a day of great disorder, disorganization, imperfection and disintegration for the nation of America. What the Spirit is testifying is that America will never more be the same. She is about to experience a complete collapse, and both the people and the President have themselves been prophesying of these things in ignorance.

We live in a day when great calamity will befall the people of America. These will be days of horror, of fear, of chaos and great desperation. These days could have been avoided, but the nation and her rulers have hardened themselves against the will of God.

Proverbs 29:1
He who is often rebuked, and hardens his neck, will suddenly be destroyed, and that without remedy.

Yahweh has given the nation and her rulers time to repent, but they would not. The judgment now comes, and the people and their chosen ruler have prophesied it by their own lips.