The following article was written by a brother in Christ with whom I have corresponded for many years. Glen wrote an introduction to the book Evidence of Things Unseen, and I have found his financial insights very helpful, not to mention his spiritual insights as well. I wanted to pass this writing along to you. It was written a year ago.

It is evident that there is much shaking in the economic sector of America. As Glen recently told me, “The second tower has been hit and is now on fire.” It will not be long now before a total and sudden collapse occurs. Are you ready?

8:46 AM EST: American Airlines Flight 11 crashes into the North Tower of the World Trade Center hitting at the 94-98th floors. Within minutes the fire is displayed on the 24 hour news networks. To the anchormen and a curious public it is yet another accident to watch in a detached manner. We feel sorry for the people in the building, but it does not effect us directly.

9:02 AM EST: Live cameras record American Airlines Flight 175 as it explodes before eyes of millions as it crashes into the 78-84th floors of the South Tower. All of a sudden, the feeling of detachment is gone. This is intentional. The speculation begins. Who is doing this.

9:37 AM EST: Reports come in that yet another jet has crashed into the Pentagon.

10:03 AM EST: United Airlines Flight 93 has crashed in a Pennsylvania field.

The nation is horrified and transfixed at the live scene of the smoke and flames pouring out of the twin towers. Some viewers look away as the cameras zoom in to capture the spectacle of dozens of people jumping to their death to escape the flames. The rest are mesmerized. 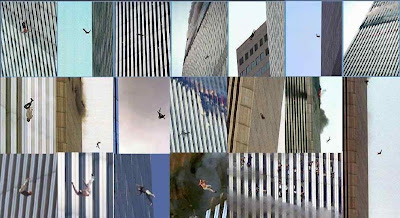 Television is not the only audience. The crowds fill the streets of NY looking up at the destruction. Everyone watches as suddenly, at 9:59 AM the North Tower collapses in a gigantic cloud of dust and debris that engulfs the bystanders as they run for their lives. In the shadow you can see the camera man is fleeing for his life. Only the camera is looking back to record the destruction that is overtaking him. The video cuts off just before the fleeing camera man is engulfed.

The news is remarkably quiet today concerning 9/11. Even the New York Times has nothing but a comment by Mayor Bloomberg that it is time to move on. If 9/11 was a warning then it appears the country has missed it.

The twin towers of the World Trade Center were the worlds greatest symbol of wealth and financial might. They represent the two pillars of wealth in the world, real estate wealth and financial wealth. Today, the North tower of real estate has been hit and is burning. It was hit near the top of the building. Real estate that was purchased at the highest prices has already come under fire. Some of the world is watching the real estate tower burn, but most are continuing on to work and play. They don't see that it effects them.

Soon, the South tower of the stock market will be hit in its upper reaches. Then, the people will be alarmed, but it will be too late. Both towers will be on fire and many will leap out of the buildings trying to avoid the flames. Then both towers will crumble to their foundations, and like the World Trade Center towers, destroy many lesser towers with them.

If the Lord is still speaking to us in similitudes, then He has made this one very clear. First the natural, then the spiritual.

Last week-end, beginning on September 12th, America was beset with two disastrous events that competed for space as leading stories. In Texas all eyes were on Hurricane Ike, while in California news of a train crash resulting in great injury and loss of life was front and center. Both of these events serve as symbols of what is coming quickly upon America. Those whose lives were personally impacted by either of these events can testify to the devastating consequences and how life is forever altered.

Hurricane Ike devastated some low lying coastal communities, some of which, like New Orleans, will probably never come back. At the same time nearly the entire Houston metropolitan area lost power. At the height of the problem the news reported that 22% of the state of Texas was without power. Surely there is a parable here of the loss of power that is coming to America. The nation that boasts of being the world’s only superpower will soon be stripped of power, disrupting the lives of all her citizens.

The train that crashed was Metrolink 111, a commuter train that had originated at Union Station in Los Angeles. It had 222 passengers aboard (this number has varied slightly in different accounts.) These are both numbers the Lord had brought to my attention in recent days, and you will find them written about in the blog entry titled The Incredible Journey (http://parablesblog.blogspot.com/2008/08/incredible-journey.html).

The Spirit of Christ has been testifying that a day of judgment is fast approaching where God will judge the wickedness of the nations. Christ is coming with sickle in hand to cut away all flesh from His church and to render judgment to the nations. What is coming will be utterly devastating. It will be like running head on into a freight train.

I have shared much about the signs pointing to the collapse of America, the disintegration of Columbia. God has not been sparing in giving witnesses to the coming judgment. It will be utterly devastating. It will be brutal. Just read about the crash of Metrolink 111 and you will understand how awful things will soon be in a nation that has been at ease, pursuing pleasure, and indulging every wicked imagination. 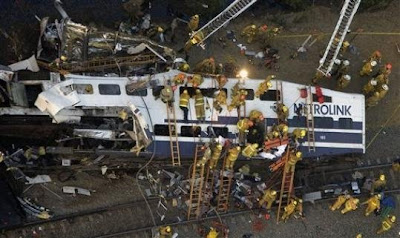 That the train had left Union Station and crashed headlong into a Union Pacific freight train, speaks of the disintegration of America, which was formed to be “a more perfect union.” The Preamble to the Constitution begins with the following words:

We the People of the United States, in Order to form a more perfect Union, establish Justice, insure domestic Tranquility, provide for the common defence, promote the general Welfare, and secure the Blessings of Liberty to ourselves and our Posterity, do ordain and establish this Constitution for the United States of America.

The Union that the forefathers of America had envisioned, this great experiment of Thomas Jefferson and others, has ended in gross sin and widespread corruption, both in government and society. Those driving the train of this nation have ignored all the stop lights, all the signs of warning, and have continued on a course of destruction without even slowing their forward speed.

All the while, those aboard have gone on without suspecting that life is about to end as they have known it. Many will perish, their lives snuffed out suddenly in calamitous events. Many more will suffer great injury. It will be a mere remnant who walk away having suffered no harm.

People of God, the Spirit is testifying that great and terrible days are just ahead. It will be a difficult period for any person to experience. Tales of grief and sorrow will become the portion of those whose conversations had focused upon their next purchase, their next entertainment, their next meal. Very suddenly the lives of all those aboard Metrolink 111 changed, and so too will things change in the days ahead. The signs of collapse, or disintegration, are all around, yet most are unseeing, most are oblivious to the destruction just around the bend.

I urge you to press into the Father at this time. Cry out for mercy for yourselves and others. Repent of any idols, any hidden sin. Pursue righteousness. Pursue humility. Perhaps you will be hidden in the day of the Lord’s anger.