Laying Down the Law - Conclusion 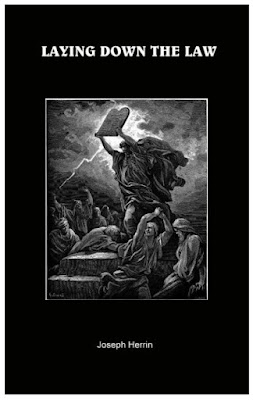 It is not possible in a single book to answer every question, or objection, raised by those who have adopted the belief that the Law continues in its authority over the lives of those who are Christians. If I included the proofs I have presented to the saints from  every correspondence I have had on this topic over the years, this book would run to hundreds of pages. My intent has not been to answer every spurious argument, no matter how sincere, but rather to lay a foundation for understanding the purpose and limitations of the Law.

I find the testimony of the Bible to be consistent. The Law was given for a determined period of time until Christ should come. It was not made for the righteous, but rather for men who were slaves to sin. It contained only a shadow of the righteousness of God, pointing forward to the substance which would be realized in His Son. The saints in Christ have died to the Law that they might be joined to Another. The Law’s role as guide to men has given way to a much fuller revelation of the will of God as men and women are directed by the indwelling Spirit of Christ.

Despite, having declared these things with patience and clarity, utilizing a vast array of Scriptures as evidence, there will no doubt remain some questions. It is difficult for the mind of man to adjust itself to a new paradigm. Moving from a life ruled by the Law to life in the Spirit constitutes a profound alteration of a person’s life. Even those who are able to embrace the truth may find it difficult to break free of the habits formed while under the rule of the Law.

I am reminded of a brother in Christ many years ago who gave up smoking after becoming a believer. He testified that he would find his body acting as if it still smoked for a significant time after he had quit. He shared that after eating a meal, or when fishing, he would at times find his hand fumbling in his pocket as if to retrieve a cigarette, though the cigarettes were no longer there.

A sister in Christ wrote to me yesterday after having read this teaching series. She expressed difficulty adjusting to the truth that those who walk by the  Spirit are no longer bound to keep the shadows of the Law of Moses. Although, as previously shared, the majority of commandments cannot be fulfilled today, for they were written for a specific people with a unique form of government, some still have difficulty grasping that the Law’s jurisdiction ends at Christ.

Are you, as a saint in Christ, bound to keep the dietary laws set forth by Moses? No you are not. You are, however, to be led of the Spirit in knowing what to eat. Are you bound to observe the weekly Sabbath, or the feast days? No, you are not. They were given as shadows to teach spiritual truth.

Colossians 2:16-17
Therefore no one is to act as your judge in regard to food or drink or in respect to a festival or a new moon or a Sabbath day - things which are a shadow of what is to come; but the substance belongs to Christ.

No doubt, many who are perceiving the truth shared in this book, will find it difficult to begin walking in that truth. If laying down cigarettes is difficult, laying down the Law is far more so. I listened to a man testify of having been raised in a denomination that forbid the use of musical instruments during worship. Years later, having left that church and recognizing their position on musical instruments to be error, he still felt uneasy whenever he experienced a time of worship and musical instruments were used.

This reaction is similar to a person who has burned their hand repeatedly on a hot stove. Even when they are given proofs that the stove is no longer hot, they still will only with the greatest caution reach out their hand to touch it.

The body of Christ in its early days was made up of many who had been raised in Judaism. The Law was deeply ingrained in them. It was a wrenching thing to adjust to life without it. Although the Spirit was far more capable in revealing the will of God, and empowering  people to live righteously, it was very difficult for many to let go of the old schoolmaster. Some never did.

Although the apostles taught that Christians are free from the Law, they also cautioned men and women to not violate their conscience. If a man felt condemned in eating, or was convicted that he should observe a specific day, then he should follow his conscience. Whatever could not be done in faith, was to that man sin.

Romans 14:1-5, 14-23
Receive one who is weak in the faith, but not to disputes over doubtful things. For one believes he may eat all things, but he who is weak eats only vegetables. Let not him who eats despise him who does not eat, and let not him who does not eat judge him who eats; for God has received him. Who are you to judge another's servant? To his own master he stands or falls. Indeed, he will be made to stand, for God is able to make him stand. One person esteems one day above another; another esteems every day alike. Let each be fully convinced in his own mind... I know and am convinced by the Lord Yahshua that there is nothing unclean of itself; but to him who considers anything to be unclean, to him it is unclean... All things indeed are pure, but it is evil for the man who eats with offense... Do you have faith? Have it to yourself before God. Happy is he who does not condemn himself in what he approves. But he who doubts is condemned if he eats, because he does not eat from faith; for whatever is not from faith is sin.

To those whose conscience is troubled at eating things the Law declared to be unclean, I say “Do not eat such things.” At the same time, do not condemn your brothers and sisters who have freedom. You who have the liberty in Christ to eat all things, do not despise the one whose conscience will not permit him to do so. Let love be the motive behind our words and actions.

If you are led to observe the weekly Sabbath as a day of rest, I do not condemn you. At the same time, I urge you to not confuse the observance of the shadow with the fulfillment of its substance. As one born of God you are called to cease from your own labors seven days a week. Additionally, you should not condemn those who do not observe the weekly Sabbath. Paul says to the saints, “Let no one judge you” in these things.

The goal of this writing is not to promote lawlessness. No Christian is given carte blanche to do whatever his soul desires. All are to be led of the Spirit. It has been my purpose to lead the saints to a Spirit-led life. Christ declared that we are to be perfect. The Law makes nothing perfect. Only the Spirit of God has this power.

Jude 24
Now to Him who is able to keep you from stumbling, and to present you perfect before the presence of His glory with exceeding joy...

If you have been born again of the Spirit of Christ, you have received an exceedingly precious treasure. The Spirit within you has the capacity to transform the most wicked and vile into spiritual men and women who walk in righteousness. Every dark area of your life can be made light. Every enemy in the land of your flesh can be subdued. Every stronghold can be pulled down. Every giant in your life can be slain.

Moses’ ministry ended in the wilderness. He was not permitted to cross the Jordan. It was Joshua (Yahshua) who led the people into their inheritance. We must leave Moses behind that we might follow our Savior in to take possession of the land. The kingdom of God is within you. Though you come to Christ when sin has reached its fulness in your life (as it had in the land of Canaan), Christ is able to subdue every enemy and transform your body into a land of righteousness and peace.

Let as many as would be perfect lay aside the shadows and begin to follow the Spirit of Christ who goes before them. He will lead you into battle. If you will walk in faith and obedience, He has promised you the victory. No enemy in your land will be able to stand before you all the days of your life.

Moses was not permitted to lead the people of God into battle with their enemies. Even when battle was engaged with Amalek prior to crossing the Jordan, it was Joshua who led the people in battle. The Law has no power to subdue the sin in man’s flesh. Christ Yahshua has conquered both sin and death. If you will follow Him, He will lead you to victory over all the enemies in your flesh.

In this book, I have laid a foundation for discerning the role of the Law. If you have further questions, I encourage you to seek the One who has all wisdom. You have no need for any man to teach you. The anointing teaches you all things. If you lack wisdom, ask of God. Believe He will give you the wisdom and understanding you seek and it will be given to you.

Test all things. Examine all things carefully. It is needful that the saints become proficient at rightly dividing the word of God for themselves. The children of Israel begged Moses to speak to God for them. They wanted someone else to tell them what God was speaking. It is not to be the same for those in Christ. The sons of God have access directly to the Father. They need not even petition Christ to disclose the Father’s will to them.

You are able to go boldly before the throne of grace. Entrance to the presence of the Father has been gained for all who are in Christ. Take advantage of this entrance. Seek Him. Walk by the Spirit. Those who do so are well pleasing in His sight.

May you be blessed with peace and understanding in these days.
Heart4God Website: http://www.heart4god.ws