Peace is Being Removed - A Second Witness 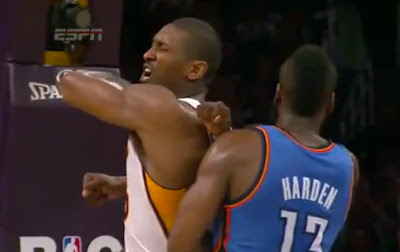 After I posted the blog on the deaths of Don Cornelius and Dick Clark a week ago I had several people write to me and mention an event that occurred in the world of NBA basketball. The people writing perceived this news item to be a further witness warning Yahweh’s people that peace is soon to be removed from the earth.

In 2011 the basketball player named Ron Artest changed his name to Metta World Peace. The first name “Metta” is derived from his Buddhist religious affiliation. The name Metta means "loving kindness and friendliness towards other." Those familiar with Ron Artest will recognize the hypocrisy in adopting such a name. Ron Artest is known as a brawler.

On November 19, 2004, Artest was at the center of an altercation among players and fans during a game in Auburn Hills, Michigan, between Artest's Pacers and the home team Detroit Pistons. The brawl involved Artest, Pistons center Ben Wallace, Artest's teammates Jermaine O'Neal and Stephen Jackson, several other players, and spectators including Pistons fan John Green and Pistons fan A. J. Shackleford.


The fight resulted in the game being stopped with less than a minute remaining. Jermaine O'Neal, Jackson and Wallace were suspended indefinitely the day after the game. A day later, the NBA suspended Artest for the rest of the regular season, plus any playoff games. Artest missed 86 games, the longest suspension for an on-court incident in NBA history.
[Source: http://en.wikipedia.org/wiki/Metta_World_Peace]

Ron Artest prides himself in being a “ghetto” ball player.

Ron Artest adopting the name Metta World Peace certainly serves as a parable for the people of God. Satan and his ministers masquerade as that which they are not. Yet, as Ron Artest declared, their nature is not going to change. Satan comes only to “kill, steal, and destroy.” It matters not whether he, or his ministers, parade themselves around as saviors of mankind and peace bringers to the nations. There is only violence in their hearts.

II Corinthians 11:13-15
For such men are false apostles, deceitful workers, disguising themselves as apostles of Christ. No wonder, for even Satan disguises himself as an angel of light. Therefore it is not surprising if his servants also disguise themselves as servants of righteousness, whose end will be according to their deeds.

On April 22nd Metta World Peace committed a flagrant foul by violently elbowing OKC Thunder basketball player James Harden in the head. Harden fell to the ground where he remained for several minutes. He was later diagnosed with a concussion. This resulted in a seven game suspension for World Peace. (It is ridiculous to even write such a sentence, but truth is often said to be stranger than fiction.)

Metta World Peace was immediately removed from the game following his flagrant foul. It is not hard to perceive in this a parable of World Peace being removed. Yet, there is another testimony in this basketball player’s life that bears witness to the fact that world peace will be removed quickly.

The popular television program Dancing with the Stars opened its 13th season on September 19, 2011. This was the very same month that Ron Artest changed his name to Metta World Peace. World Peace was chosen to be a contestant on the show, and he was the very first person to be removed from the competition, being voted off the show the first night. This quick exit is a further testimony to the lateness of the hour. The saints can anticipate World Peace being removed without delay not many days from now.

It seems significant also that this was the 13th season for Dancing with the Stars. The number 13 has come to be associated as a number of ill omen. E.W. Bullinger in his book Number in Scripture has the following to say.

As to the significance of thirteen, all are aware that it has come down to us as a number of ill-omen. Many superstitions cluster around it, and various explanations are current concerning them.


Unfortunately, those who go backwards to find a reason seldom go back far enough. The popular explanations do not, so far as we are aware, go further back than the Apostles. But we must go back to the first occurrence of the number thirteen in order to discover the key to its significance. It occurs first in Gen 14:4, where we read "Twelve years they served Chedorlaomer, and the thirteenth year they REBELLED."


Hence every occurrence of the number thirteen, and likewise of every multiple of it, stamps that with which it stands in connection with rebellion, apostasy, defection, corruption, disintegration, revolution, or some kindred idea.
[Source: http://philologos.org/__eb-nis/eight.htm#205]

He gained fame playing in some of New York City's high profile summer basketball tournaments at Nike Pro City, Hoops in the Sun at Orchard Beach, Bronx, New York and Dyckman Park at Washington Heights, earning himself nicknames such as Tru Warier and The New World Order, a name he received from Randy Cruz (one of the co-founders of the Hoops In The Sun basketball league at Orchard Beach in the Bronx, New York).
[Source: http://en.wikipedia.org/wiki/Metta_World_Peace]

As the blog testified yesterday, the New World Order, which is synonymous with Babylon rising, Satan’s visible kingdom in the earth, will only be ushered in through a time of great chaos, war, bloodshed, famine, and worldwide devastation. I believe the Spirit is testifying that these things are near at hand. For many people, they will come as suddenly, and unexpectedly as a blow to the head. We, however, are not children of the dark that such a day should come upon us unexpectedly.

I Thessalonians 5:4-8
But you, brethren, are not in darkness, that the day would overtake you like a thief; for you are all sons of light and sons of day. We are not of night nor of darkness; so then let us not sleep as others do, but let us be alert and sober. For those who sleep do their sleeping at night, and those who get drunk get drunk at night. But since we are of the day, let us be sober...

In coming days I will be posting blogs that testify of preparations that the Father has been directing me to take in preparation for what lies ahead. Although I have been proclaiming that judgment is coming to the church and the nations for years, I have never until the past two months been directed by the Spirit to make preparations of such a practical nature as I am being led to do now.

I encourage all the saints to press into the Father and inquire of Him to know what He would have YOU to do that the day spoken of will not come upon you unawares.

May you be blessed with peace and understanding in these days.

Dear Joseph,
Metta's jersey number is 15. Five is the number of grace. I would think three fives would signify much grace. Not only is world peace being removed but GOD's grace and HE will not tollerate sin anymore.
GOD be with us in KING YESHUA's name!
Deirdre

Dear Bro Herrin, I am a person of few words. I rather speak short and simple. I have been serving God for thirty three years now. Even as a child I prayed. I have been doing much suffering and repenting. I was praying the other night. When I felt very strongly to fast and seek Yahweh for direction and to also tell my children to set things in order with God. I felt very much that something had been determined in God and nothing good change what was coming. The only thing now is to make ready in God and stand in His word. Fear is not Faith. We must cleanse ourselves and enter in to the Ark of God. All three of my children know God but only one walks daily with Him. I fear this is much like the church of today. Wishing to ride on someone else's ticket. I fear they will be greatly disappointed this time. I also had a dream and in it I didn't understand all the language. I only repeated one word someone spoke and I was arrested. It was going to cost me my life and nothing could change that, I keep asking to not let me die in vain but let my life save others in not making the same mistake. It is a time to know ALL Gods Word for are going to be held accountable. At the last minute a woman ( THE CHURCH) came to hear what I was saying I explained all to her and ask to let my death help others and not be a waste. After she listen to me she told them to set me free, Much Love Sister Susan.