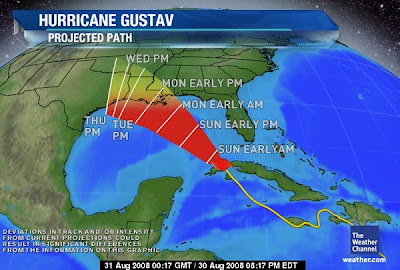 Hurricane Gustav went from a tropical storm to a category four hurricane in the space of 24 hours. Once again meteorologists are finding that hurricanes are quite difficult to predict. Most had been predicting it would reach maximum strength as a category 3 storm, and they didn't anticipate this to occur until after it reached the Gulf of Mexico. Gustav has exceeded their expectations, and many are now predicting it will reach category 5 strength, as it is only five miles an hour below that strength as of this writing.

Today as I was working on a new video presentation for the series Signs of Judgment, I was recounting the hurricane season of 2005. Hurricane Katrina struck the New Orleans area on August 29, 2005, and the debauched homosexual festival named Southern Decadence was scheduled to begin two days later. As Gustav was approaching at the same time of year I thought to go out and check and see when Southern Decadence was scheduled to take place this year.

The festival was slated to last six days, beginning on August 27 and ending Monday September 1. The plans for Southern Decadence have once more been interrupted, as a full scale evacuation of the city of New Orleans is now underway. Hotels are being emptied, and all visitors and tourists to the city are being asked to leave now. If Gustav should impact New Orleans in a calamitous way again, the city leaders should consider the correlation between hosting this immoral festival that celebrates what God terms an abomination, and the repeated destruction of their town. Even if the city sees no further impact from the storm, just the cost of evacuating the citizens, shutting down all business, and bringing in troops and rescue teams, represents a great financial loss for the city of New Orleans. The impact upon businesses who will choose not to locate in harm's way, or who will say enough is enough and move out, will be a further drag upon the local economy.

Prior to Hurricane Katrina, it was estimated that Southern Decadence brought in one hundred million dollars of revenue to the city annually. The cost of destruction from Katrina alone upon the Gulf area was a staggering 125 billion dollars. Rita upped the cost even further, and Gustav just might provide one blow too many for this already ravaged area. Sin truly is costly.

Proverbs 14:34
Righteousness exalts a nation, but sin is a disgrace to any people.

Psalms 107:33-34
He changes rivers into a wilderness, and springs of water into a thirsty ground; A fruitful land into a salt waste, because of the wickedness of those who dwell in it.

Listening to interviews of people evacuating New Orleans, it is evident that living in a city that boasts of its moral decadence does not lead to peace and happiness. Fear is evident in the hearts of those fleeing, and great anxiety over whether they will have a home to which they can return. Peace comes from walking humbly before God and leading a life of righteousness. A man or woman whose heart is right before God can go through a severe storm and remain at peace, yet the wicked flee when no one pursues them. 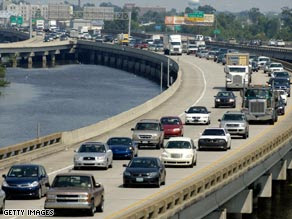 Leviticus 26:27-31
Yet if in spite of this, you do not obey Me, but act with hostility against Me, then I will act with wrathful hostility against you; and I, even I, will punish you seven times for your sins... I will lay waste your cities as well...

Gustav.. it's gusty storm!!
'Mother of all storms' heads for Gulf Coast...

Hope you find this interesting too...